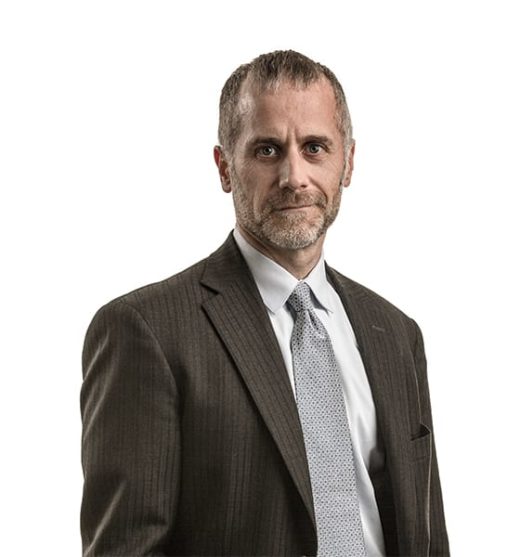 Scott Smilie is a partner in the firm’s Intellectual Property Practice Group. Scott’s practice includes all aspects of intellectual property law, including the prosecution, licensing and litigation of patents, trademarks and copyrights. As a member of the Patent Bar, Scott has prepared and prosecuted patents before the Patent and Trademark Office concerning diverse technologies including GPS-related systems, spinal fusion, business methods, electrical connectors, coupler members for heavy-duty machinery, neutron-transmuters, mechanical tools and medical devices. Scott has also successfully assisted clients in domain name disputes and in opposition and cancellation proceedings before the Trademark Trial and Appeal Board.

Having always loved math and science, Scott realized in college that he wanted to do more than just engineering. After working on a senior project at the University of Illinois that involved the filing of a patent application for an adjustment mechanism for an automotive seat, he became hooked on the legal side of protecting one’s proprietary rights. As a result, Scott proceeded to law school and has not looked back since. Scott says:

The great thing about intellectual property is that, by its very nature, it often involves something new and is literally everywhere around you—from the trademark branded sneakers you wear, the beverages you purchase, the books you read, the shows you watch, or the myriad of inventions you use in everyday life. The diversity of the practice is one of the things that I really love about my job. What other job allows you to delve into nuclear transmutation in one instance and then discuss spinal fusion or solar lighting in the next instant?

After waiting for next year most of his life, Scott was elated when the Cubs cast aside and won it all. Now he’s just waiting for the Illini to follow suit. Having finally hung up his soccer cleats after more than 40 years, Scott has now moved on to obstacle course racing with his daughter and watching her play soccer and his son run cross country. Now that his three children are getting older, Scott hopes to be able to recommence one of his earlier passions and get back into scuba diving.

Scott also loves animals and there is generally a cornucopia of wildlife running around his house. Over the years, the Smilie household has included, among other animals, dogs, cats, guinea pigs, rabbits, toads, fish, crabs, poison dart frogs, crested geckos, bearded dragons and dwarf frogs. He considered opening a zoo, but his children balked at the idea of charging their friends to come visit (or at least of their dad keeping the proceeds). Scott also enjoys fishing, but is not making a claim for being the best bass-fisherman in the city as he is not even the best fisherman in the family—that would belong to his younger son (who landed a 21”, six pound bass one week after his dad came back feeling pretty proud of himself after his first Canadian fishing trip—needless to say, it appears that Scott will have company and competition on his next fishing trip north of the border).

Scott has lived in and around Chicago his entire life, growing up in LaGrange Park and now living in Naperville with his wife, three children and various pets. Scott attended the University of Illinois at Urbana-Champaign where he received a B.S. in General Engineering in 1993. He received his J.D. with honors from Chicago-Kent College of Law in 1997. While at Chicago-Kent, he served on the Chicago-Kent Law Review and was involved in the creation of an electronic intellectual property law review.

Scott is admitted to, among others, the Illinois State Bar and the Bar of the U.S. District Court for the Northern District of Illinois and is registered to practice before the U.S. Patent and Trademark Office. Scott also is a member of the Chicago Bar Association and the Intellectual Property Law Association of Chicago.